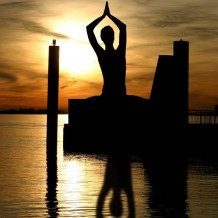 A study conducted by Brown University demonstrates how MBSR can reduce stress and change brain wave patterns. Mindfulness based stress reduction, MBSR, originated with the Buddhist 2,000 years ago and is based on meditation. Today, researchers are finding that mediation may be linked to brain filtering.

MBSR places a “spotlight of attention” on different parts of the body. The goal of the 8-week program is to develop awareness of mental states, reduce chronic pain, and reduce risks of depression and stress.

While these effects have been known for some time, researchers at Brown University attempted to take MBSR one-step further. Researchers were eager to explore if MBSR could impact alpha brain waves that control attention spans.

The team set out to test their theory. 12 healthy adults were divided into two groups: a group that underwent MBSR training for 8 weeks and a control group that did not. Following the 8-week training, the brain waves of both groups were measured. Magnetoencephalography (MEG), a brain imagining technique, was used to measure each individual’s alpha brain waves.

The test consisted of being attached to the MEG while participants were tapped on their hands and feet at different intervals. Results showed that those who underwent MBSR training had greater and faster alpha brain wave changes in response to the taps. The surges of alpha waves highlighted that participants who had undergone MBSR training were better able to quickly focus their attention to the taps than those who did not undergo training.

Although it is too early to declare mediation as an antidote for chronic pain and link it to attention spans, the study does confirm previous findings of the same type. At this point it is up to the researchers to definitively prove this theory!