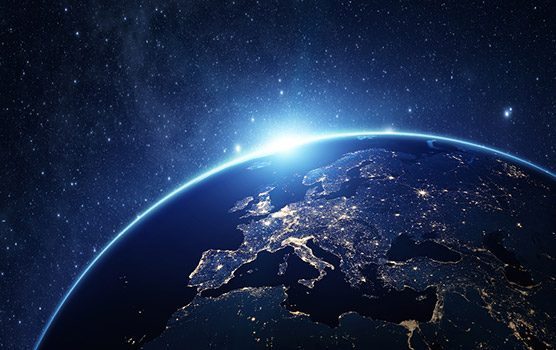 The physical worlds, planetary systems and universes are connected through energetic and electromagnetic lines and grids which overlap in such a way as to unite homogeneously. They all converge at one Source, the original Universal Creator-Source from which all Life springs. No world can be sustained outside these energetic fields or without the rhythmic breath and pulse of this Creator-Source.

Your planet’s gravitational and electromagnetic grid is located approximately 7,000 miles from Earth and forms a perfect spherical matrix around its surface. These electromagnetic systems continue on to outer layers of physical space, to balance each neighboring planet and star system. The Earth’s grids and energetic lines form a matrix which contains ALL human, physical, “mind-al” and spiritual patterns. Through these grids, you are energetically connected with all other beings and things including the Earth itself from which you have sprung.

The energetic grids have several functions which include establishing and maintaining gravitational forces, interplanetary communication and broadcasts, vehicle transportation and time separation.

All existence, physical and non-physical, has consciousness to a varying degree and due to its electromagnetic nature, it must travel and communicate through energetic lines. A thought or a force, for example, has a vibrational frequency which requires the use of grids and matrixes to travel from one physical point to another. Thought is communicated within your planet, and with other planets, galaxies and universes through these energetic lines. While invisible to you, these communications and broadcasts are actual and incessant allowing the maintenance of a Thought / Mind balance within your planet and your neighboring worlds.

The energetic grids on your planet are arranged in such a way as to allow communication with other worlds, physical and non-physical. The transfer of thought occurs through these grids: Divine Beings monitor such communication to ensure spiritual expansion of the species, while you knowingly or unknowingly transfer thoughts with other human and non-human entities and call it synchronicity or telepathy.

Similar to thought travel, Celestial Beings and Forces require transport vehicles and routes to commute between the worlds. Interplanetary, intergalactic and universal transports are made possible through grids aligned in such a way as to connect the different physical areas you can be transported to. While similar concepts already exist in your science-fiction world, they are nonetheless real and necessary for the evolution and expansion of all intelligent beings within the Cosmos. Throughout your history, Earth has experienced the visitation of “extra-terrestrial” and “super-human” intelligent beings. These visitations are also made possible through the grid lines established to transport and convert consciousness of elevated frequencies. When certain planetary and star alignments occur, the grid lines of the respective worlds are in a precise configuration as to permit a specific energetic exchange. The arrival or landing of super-human beings on your planet occurs at such propitious times.

While grid lines converge at different points of the Earth matrix, only one site on your planet is considered to be the “umbilical cord” that connects you to the nucleus of your Universe, where your planetary Divine Creators and Divine Guardians reside. That site is located approximately at the 33 to 35-degree latitude and the 33 to 35-degree longitude conjunction points of your planet and is considered the only possible entry and exit point for super-human and Divine Beings. This area corresponds to your current Middle Eastern countries, namely Israel and Lebanon. However, due to the continuous galactic movements and axis shifts which affect your planet approximately every 20,000 years, this conjunction point was once located over ancient Mesopotamia and is still in motion. Since these divine doorways are the most charged electromagnetically, they will also allow the occurrence and strong acceleration of all human energy, positive or negative. The conflicts you are currently observing in these areas are particularly significant to the overall human economic, sociological, religious and political stability. However, due to this energetic supercharge, violent clashes in these mystical areas will remain hopelessly incessant.

It is important to recognize however that the current axis shift is of an unusual nature and will be setting the Earth in a new configuration which will re-align all entry and access points with your Divine Creators’ headquarters. Your latest planetary alignment in 2003 was the final factor necessary to complete the locking, so to speak, of your planet’s position within the Cosmos. While it will perpetually adjust and shift, Earth’s energetic doors have now been opened, which established your new era and, hence, freed your planet from its long isolation.

Caroline Cory is a futurist, a visionary and the founder of the OMnium Method of Learning and Healing. The OMnium Method is based on an experiential methodolgy that allows the spontaneous alignment of the physical cells and the human brain with the Universal-Source frequency. This method provides an instant and permanent cellular reprogramming to the original blueprint so that healing or learning may occur organically.

Caroline’s experience with the worlds of Consciousness, Energy Medicine and Spirituality started at the early age of 5 when she spontaneously began to perceive a powerful energy form called Source Energy. With time, her ability to perceive and discern subtle energy with precision allowed her to identify the nature and functioning of this energy. She defines it as “the Source of all energy forms in existence, which spring from the center of each universe and ultimately meet at the First Center of Creation: The Creator-Source.” From that point on, she could perceive and retrieve further information regarding the multi-universal roadmap, the cosmic structure of consciousness, and also the universal configuration of the human physical body, the human mind, its cellular memory and the construct of earthly reality.

More importantly, Caroline realized that this spontaneous opening to Source frequency was due to a proper alignment and vibrational increase in her brain channels and energy field. While this process can be achieved by all humans, the understanding of its mechanics was key to fully master this ability so that it could now be taught with clarity to others.

Caroline currently teaches the OMnium Method of Learning and Healing – which is based purely on vibrational entrainment with Source frequency – through tele-classes, webinars and live events. Her experiential teaching method is unique and covers a variety of subjects that include: Mind Mastery, Spiritual Alignment and Connection to Source, DNA reconfiguration, various Zero Point alignment techniques, time suspension among other cutting edge techniques. She also conducts group healings through world webcasts reaching thousands of people in 92 countries around the globe who regularly report their deep cellular transformation and the spontaneous reversal of imbalances.

In her own words:

My mission is to simply allow the vibration of the Universal Source to filter through my being so that all that I do, think or say is a reflection of my Higher Consciousness or Divine Self. My focus is to continuously uplift the human spirit through healing, teaching, as well as creative and artistic means, so that all may begin to experience their personal and unique relationship with their own Divine Self and the Universal Creator-Source.