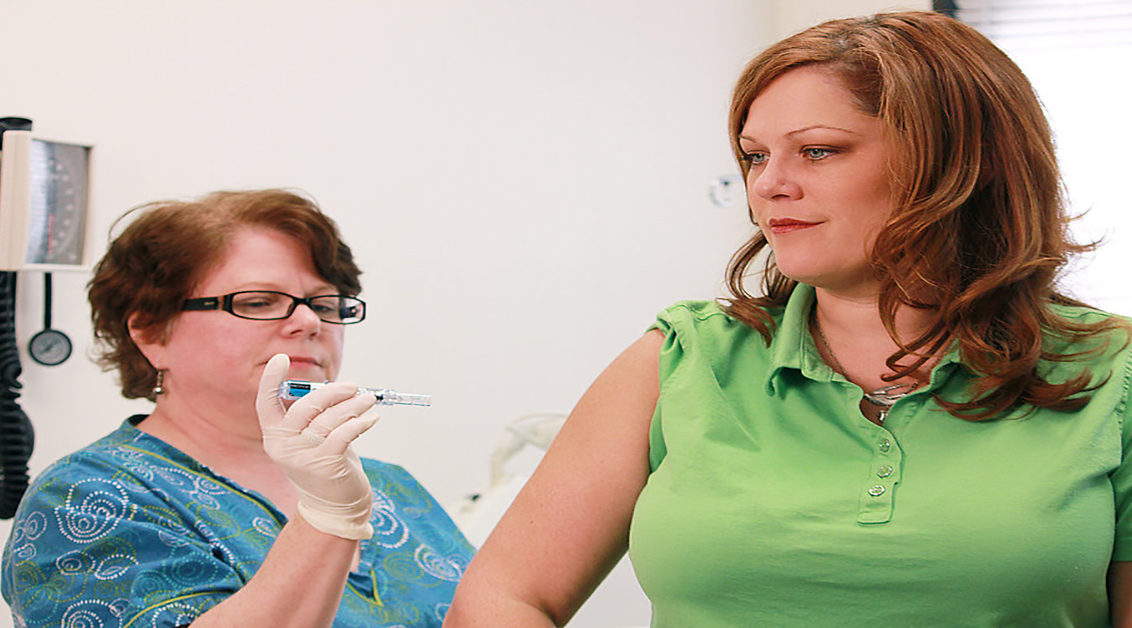 Flu Shot 101: Your Guide to Whether the Flu Shot is Right for You

Flu season is in full gear! We are currently in the middle of flu season and many people are wondering if they should hunker down and get a flu shot.  Many have heard some negative things about the shot and are expressing concerns about some possible side effects and would like me to give them some information so they can decide what they should do.

Before we begin our discussion, I do want to make it clear that it is totally up to you to decide which way to go.  All I can do is present the pros and cons of both sides. You do what makes the most sense to you and what you feel most comfortable doing.

So here goes: the flu is a virus, thus there are no antibiotics you can take once you get it, since antibiotics only kill bacteria. Modern medicine has some medications to ward off the symptoms of the flu, such as decongestants, cough syrups, an antiviral drug, analgesics, and other anti-inflammatory pain relievers. However, treatment consists primarily of rest and plenty of fluids to let the body fight the infection on its own.

How Does A Flu Shot Work?

Flu shots are given to prevent infection by helping the body develop antibodies to the flu virus that is going around that year. Having said that…it is also good to know the other side of the argument:

First, the flu vaccine is far from perfect as it is only about 60% effective, and some years, such as this one, even much less.

Second, the flu shot does contain mercury, which in the long run can actually weaken your immune system, making you even more susceptible to getting the flu in the future.  Keep in mind – the immune system consists of 1) the friendly bacteria in the gut – which are the first line of defense for incoming cold and flu viruses and are present in every breath we take; 2) the liver – which makes antibodies to diseases; and 3) the bone marrow – where most of the immune system cells- white blood cells, red blood cells, and platelets- are made.

From Ayurveda, we have learnt that mercury, one of the ingredients in the flu shot is excessively hot by nature, so much so, that it burns the friendly bacteria immediately after the shot is given. It also heats the liver disrupting its normal function, and goes directly into the bone marrow due to its sharp piercing properties.  Keep in mind that toxins accumulating in the bone marrow can trigger an autoimmune disease, which is why we ayurvedically explain that autoimmune diseases such as Guillain-Barre, and others, can occur after receiving a flu shot.

The body contains seven tissues (or dhatus) which we recognize in Ayurveda:  rasa, rakta, mamsa, meda, asthi, majja and shukra.  These are the Sanskrit names.

In English they are: the blood plasma, blood, muscle, fat, bone, bone marrow, and reproductive fluids. There are gaps in between these seven tissues so that toxins cannot make their way into the bone marrow directly. Those gaps act as a filtering defense system but also metabolize the incoming materials from one tissue to the next.We can say that it is Nature’s way of protecting us from developing autoimmune diseases and cancer by protecting and shielding the bone marrow in order to prevent a build up of toxins there.

HOWEVER, these very hot, piercing elements, such as mercury, which speedily bypass and penetrate through all the barriers, go directly into the bone marrow, wreaking havoc there.

What’s in your Flu Shot?

According to the CDC, here is a list of all the ingredients in a flu shot:  four or five different flu strains, formaldehyde, aluminum, gelatin, mercury, chicken egg proteins, and antibiotics.

Why is formaldehyde used in the flu shot?  It is included because it is needed to deactivate the virus they are injecting into you to prevent it from actually giving you the flu and, also to kill any other toxins in the flu shot preventing you from getting sick from them. (Please do keep in mind that formaldehyde itself is both toxic and deadly).

Why is aluminum used in the flu vaccine?  Aluminum is considered an adjuvant to boost your immune system to respond to the virus they are injecting into you, which is one of the reasons many people will develop an autoimmune disease after their flu shot, as their immune system is synthetically pushed beyond its normal function.

Adjuvants are also used to prevent sickness from the diseases after receiving the shot. Aluminum is the most common adjuvant used in vaccines. (Keep this in mind as well: it is a potent neurotoxin and has repeatedly been shown in numerous studies to cause brain damage, especially Alzheimer’s).

Why is Thimerosal (mercury) part of the flu vaccine?  Because it keeps bacteria and fungi from growing in the vaccine which can otherwise happen when a syringe is in a vial.  No need for a side note here as we just mentioned how deadly mercury is – in fact it is considered to be THE most deadly compound known to mankind.

Why are eggs in the flu shot?  The flu virus needs somewhere to grow before it’s in the vaccine. The virus copies itself while in fertilized chicken eggs, and then it is separated from the egg and is now ready for vaccination. But sometimes egg protein remains in the virus after the process, which could be a problem for those allergic to eggs, or those who are strict vegetarians.  Also, it is easy for infection to grow in the eggs, which is why antibiotics (neomycin) are included in the flu shot, as they keep bacteria from getting into the eggs, which aren’t sterile.

Here are a few other interesting facts to help you make a decision on which way to help you prevent and/or treat the flu:

Perhaps the study which alarmed me the most regarding the flu shot was from Bodewes R., et al., Journal of Virology, Volume 85, August 31, 2011, entitled, “Annual vaccination against influenza virus hampers development of virus-specific T cell immunity in children.”

It is your T cells which connect to viruses on the outside of infected cells and kill them. Thus, they find and destroy infected cells that have been turned into virus-making factories.

The alarming thing about this article is that it demonstrates once and for all that the flu shot can actually suppress the development of these extremely important T cells. What this means is that while yes, by receiving a flu shot, you (or your child) may not get the flu this year (although many, many of my patients come down with the flu after receiving one), in the long run, you may seriously disable your immune system in the future making it less effective in warding off colds and flus.

This is the modern medical model of how to prevent the flu.  Let’s switch now to a somewhat less toxic approach used in SVA to both prevent and treat symptoms of the flu.

SVA Tips and Guidelines to Protect Against the Flu

First, now that you know the three parts of the immune system, keep them in good working order by either taking a good probiotic such as Natren’s probiotics or making good homemade yogurt from Natren’s yogurt starter and then making lassi or buttermilk to keep your friendly bacteria in good shape.

Be careful with having milk and milk products in the Winter time. Always add some spice mixture, or fresh ginger if you can handle and like it, to help you digest milk products and yoghurt fully. Vaidya’s Mom’s Masala is pretoasted and can be added to your lassi (buttermilk).

Next, take very good care of your liver, which means watch all the food you eat, the pharmaceuticals and nutraceuticals you take, the skin care products you use, as well as your exposure to pesticides, heavy metals and air pollution, as the liver has to clear the body of all these toxins. Seek out advice from a SVA practitioner to see if you need any of our herbs which can support the liver in all its functions.

Support your bone marrow through the use of moringa drops, tea or powder, or you can actually cook with moringa leaves and/or drumstick if you can find them (usually available in Indian markets). In addition, guduchi is the best herb for cleaning the bone marrow – available in drops, transdermal creams, tablets and guduchi satwa powder, if your liver is too hot to handle guduchi leaf tablets. Just follow the directions on the bottles for proper dosage.

Zinc can dismantle cold or flu viruses, but it must be burnt repeatedly into an ash, called a bhasma, for best absorption and assimilation into the cells. We have two strengths of zinc (called “Yasad Bhasma”), regular and Maha (which is a higher potency) drops. Put five drops in one cup of alkaline spring water a day and drink it down (only once a day is necessary).

Melt 1 tbs of ghee, add 1 tsp of dried ground turmeric, and saute it over a low heat for a couple of minutes to allow the turmeric to infuse into the ghee. Then pour this on your food 2-3 times a day. Turmeric can also kill viruses and bacteria upon contact. This is recommended when you actually have the flu or a cold to kill the virus. Then go back to your regular use of turmeric after the infection is gone.

Some people recommend simmering turmeric in milk at bedtime for a few minutes to ward off infections. Add 2 pinches to your cup of milk and let simmer. Sip slowly after it cools down.

Immuno Support capsules can be taken, one after breakfast and one after dinner, if you choose to take an herbal route. These are various Ayurvedic herbs to boost your immune system to prevent a cold or a flu. Or you could choose immune support drops, 3 drops a day in 24 oz room temperature spring water, sipped slowly throughout the day.

Amla berry has 20 times more vitamin C than an orange, yet turns alkaline when it comes into the body, and has been used to ward off colds and flus for centuries. This is available in tablet (two tablets a day) or drop form (3 drops a day) as well.

For coughs, there are numerous herbs from Boswellia drops to fight inflammation in the lungs to Kantakari cough syrup(not for children under 12) to kantakari drops (for all age groups). Kantakari is a bronchodilator, and works to open up the bronchial tubes if you are having difficulty breathing.

And finally, as always, eat a healthy diet and go to bed early, to allow for optimum immune function. By using all these tools, you will be better prepared to both prevent and treat any cold or flu symptoms that might come your way this winter/spring.

Hope this helped you in making your decision!

Call Dr. Teitelbaum’s clinic to set up an in-person or over-the-phone SVA consultation: