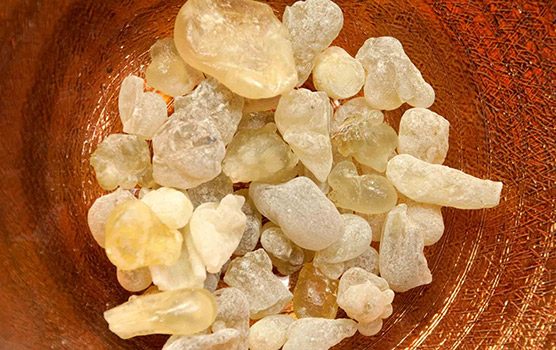 Frankincense: What Is It and What Are Its Healing Properties?

Many of us know the story of Jesus’s birth and the gifts that the three wise men brought him. One of those gifts was frankincense. However, some may not know exactly what frankincense is and why it was given to baby Jesus. So what is it?

Frankincense is a resin (dried sap) that comes from the Boswellia trees, more specifically from Boswellia sacra. The sap is milky white and is extracted from the tree bark, then left for several days to harden into a gum resin. These Boswellia trees are abundant in Oman and southern Yemen, but are most prevalent in northern Somalia. The aromatic resin collected from these trees is used in many incenses and perfumes. It is also used in essential oils, which are made by steam distillation of the dry resin.

Frankincense is described as having a lemony, musky odor. It is both sweet and fruity, but earthy and woody. It is often burned as incense in many Christian churches. It has been theorized that it was given as a gift to baby Jesus because it was an acknowledgement of his priesthood, which set him apart from a typical king. However, it is also known to have healing properties and could be connected to immune modulating effects.

Frankincense essential oil is used in cosmetics and as a fragrance, but it also has many different health benefits. It was traditionally used to prevent disease, reduce inflammation, and modify the immune system. It has been proven to fight pain and inflammation and boost the immune system, but it has many other benefits, too.

In the realm of beauty, it is used for maintaining healthy skin. It can help treat dry skin, reverse signs of aging, and reduce the visibility of stretch marks and scars. It can also be used to reduce acne, shrink pores, and prevent wrinkles. It helps with healthy cell regeneration and keeping existing cells and tissues healthy.

Aromatherapy uses frankincense as a way to relax and destress. It has been used in mitigating anxiety and depression due to its comforting properties. It evokes feelings of peace and satisfaction. A few drops of oil can be added to a hot bath or an oil diffuser or vaporizer. Some people also use the aroma of frankincense oil to improve their spiritual connection.

Recently, researchers have been studying the effects of frankincense on cancer. It has demonstrated anti-cancer properties and the ability to diminish many different kind of cancer cells. More research is needed, but the potential and properties of frankincense exist. It could possibly be a key player in fighting cancer.

Frankincense used to be much more valuable and difficult to obtain. During the 4th century AD, the spread of Christianity caused a deficit in the market due to high demand. Recently, it has become more popular due to modern studies of the healing properties it possesses.

Unfortunatley, the population of Boswellia trees is declining. Ecologists from the Netherlands and Ethiopia estimate that the production of frankincense could drop to half over the next fifteen years. Even more devastating, they predicted that the number of Boswellia trees could decline by 90% over the next 50 years. This is due in part to over-tapping, but also because few Boswellia seedlings survive to become saplings. This makes it even harder to rebuild the population.

In order to maintain the Boswellia population and the healing frankincense it provides, measures need to be taken to preserve and protect these ancient trees. Frankincense is an invaluable natural medicine that the world cannot afford to lose.