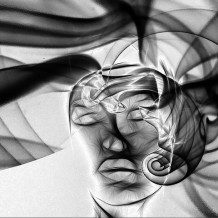 The Hidden Messages from the Subconscious Mind

In 1984 David Oates damaged a tape deck, but carelessly left it one as it played his tapes backwards. He surprisingly noticed words in the reverse playing. This tickled his curiosity, causing him to spend much of his life understanding this phenomenon. He discovered that we all have reverse messages in our speech. In 1987 Oates published his initial theories on reverse speech, followed by several books on the subject.
David believes reverse speech reveals what one is thinking while speaking. The conflict of what one thinks versus says is revealed in reverse messages. When we are not true to our selves at the deepest levels, our “real” messages are hidden in our reverse speech. The content of reverse messages can be more than the incongruities of our spoken messages. It presents explanations for one’s behaviors and health issues. It includes names of past lovers, enemies, hurts, memories and even predicts outcomes of our behaviors.
Reversals occur naturally about every 5 to 15 seconds in grammatically correct sentences. Most speech has subliminal messages encoded.
The speed of the reverse speech also plays a factor in finding hidden messages. Some suggest that the information from the right hemisphere is revealed in the reverse speech, while the left brain is prominent in forward speech. Oates contested that babies’ babble is reverse speech coming from their right brain hemispheres.
At least in part messages formed in reverse speech reflect the information in the subconscious mind. When comparing communication in forward speech to its reverse messages, the backwards message adds another dimension, a complementary message or another side of the communication. When we have a gut feeling about a communication with another, maybe we are subconsciously receiving the incongruous messages in someone else’s speech. A California State University published a paper finding that the brain is able to decode reverse speech.] On some level we interpret these hidden messages.
One wonders if some people knew about this in antiquity. The Bible equates a two edged sword with our tongue. Perhaps they were referring to the conflicting backwards and forwards messages we make. Internal disharmony is created when we deliver a polite message and harbor ill will, speaking with a “forked tongue.”
A measure of a person’s evolution could be the consistency of his reverse and forward messages. Often people are not conscious of their subconscious thoughts; on some level we hide unwanted or disrespectful feeling from ourselves. Observing our reverse messages could bring subconscious conflicts to our conscious mind, perhaps forcing us to face them. With reverse speech revealing our subconscious thoughts the old adage, “the truth shall set us free,” has deeper significance.

Adventure into the world of healing with Sound!
Healing Sounds, Videos, and Art!
Www.jillswingsoflight.com