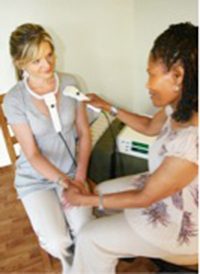 ONDAMED: The Biofeedback System that Can Help You Get Your Zing Back!

Biofeedback therapy helps you control your own autonomic systems similar to how you control your blood pressure or heart rate. These systems are regulated by the body’s ‘auto-pilot’ system. In other words, our bodies natural regulate these systems. However, with biofeedback therapy you can learn how to control these ‘auto-pilot’ functions and improve your health. If you are suffering from anxiety, controlled breathing could help ease the symptoms of stress; if you have high blood pressure, you may be able to lower it; and if your life has been made miserable by migraines, being able to reduce your own heart rate might reduce the number of attacks you have.
Biofeedback therapy is used to treat many different conditions including chronic pain, tension headaches and depression.
Chronic Illness: A Modern Epidemic
Half of all adults in the US have at least one chronic illness, a troubling picture since seven of the top ten causes of death result from chronic disease. Not only can chronic diseases onset death, but also other outcomes include disability and poor lifestyle. The most common cause of disability is arthritis, which causes significant pain for 22 million people and makes it difficult to go about daily activities.

Due to the large number of people with persistent illnesses or emotional health issues, an even greater number of citizens resort to prescription drugs in order to combat side effects. A study by the Mayo Clinic revealed that a shocking 70% of the US adult population is taking prescription medications. 20% of those are taking five or more medications in combination. The most commonly prescribed medication is antibiotics, with antidepressants ranking in second place and painkillers rest at third. For children under 19, vaccines, antibiotics and anti-asthma drugs are the most frequently prescribed medications. Unfortunately, in a pharmaceutically based medical system, health often means the absence of symptoms rather than successfully curing the problem. Modern health systems look to suppress symptoms by the use of drugs, whereas a holistic model of healthcare views a healthy functioning body as the true medication. Essentially, if you are healthy then you can function normally without the use of medications.
Prescription medications caused more than two and a half million hospital admissions in the year 2008. Despite this, less than 10% of hospital stays were due to dosing mistakes or drug addiction problems – most were due to side effects from prescription drugs that required emergency medical care. In fact, medication side-effects account for 4.7% of all hospitalizations in the United States.

Biofeedback therapy offers a safe, drug-free alternative for a healthier lifestyle. Biofeedback allows you to take control of your own body and harness your innate ability to heal. Therapists work by attaching electrodes to the skin, which monitor the patient’s muscle tension, brain wave activity and other signs. The therapist will then suggest different mental activities until one is found that helps regulate autonomic functions. Often, the process is by trial and error and it can take multiple sessions before the right approach is found. However, after discovering the secret to self-regulation, patients are quick to find relief.

After 20 years of research, the ONDAMED System, a biofeedback device, gives enhanced treatment. By manipulating a radial pulse while simultaneously introducing gentle auditory and visual stimulation electromagnetic cellular pathways tare opened improve circulation, bring pain relief and promote stress relief. Practitioners offer immediate feedback to their patients, which allow therapist to be attentive to the patient’s physiological weaknesses. Through these sessions, therapists aim to change the patient’s thinking and emotions and encourage optimal health. A healthy mind is key to a healthy lifestyle, as positive thinking keeps the heart rate healthy, steadies the blood pressure and strengthens the immune system. Combined with the physical stimulation of the ONDAMED System, you can kiss goodbye to your aches and pains.

As more and more people aren’t happy about having to take multiple medications, many decide they want to get to the root cause rather than just cover up the symptoms.

Choosing a biofeedback practitioner that uses ONDAMED can help give you the health that you deserve so you can feel on top of the world again.

This is a freelance article by Helen Grainger