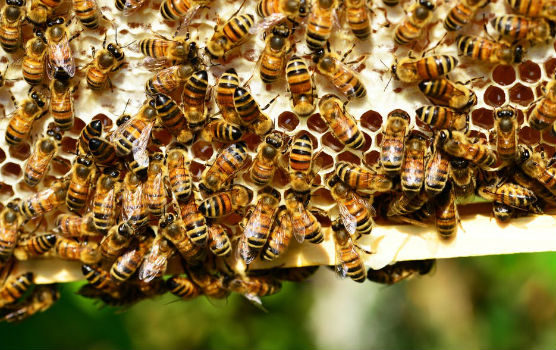 Honey Bees are in Trouble- Help Spread the Buzz!

The humble bumble bee is a very important part of our ecosystem. It is said that every third bite of food we eat is made possible by the pollination done by bees! In addition, the huge impact on pollination of plants, honey is also very useful to us. Besides the obvious deliciously sweet taste, it has many benefits to us. Honey is a natural cold and cough remedy, helps prevent heart disease and cancers, and it even has antibacterial properties for wounds and burns. Unfortunately, the bee population is seeing rapid declines. This should be a major concern for everyone, since bees have such an important impact on the world.

There are many bees dying, and experts aren’t sure on exactly all the reasons. This excessive die-off of bee colonies has happened within the last decade. According to the US Department of Agriculture (USDA) and the Apiary Inspectors of America, from April 2015-April 2016, beekeepers lost 44% of all their bee colonies. Just like with any plant or animal, nature can play a role in its survival, or lack thereof. There are many factors that can effect a bee colony’s chance of continued existence. Parasites, disease, high temperatures due to climate change, and habitat loss can cause a colony to fail. One of the several reasons linked to the current decrease in the bee population is the widespread use of pesticides. Especially in and around farms, pesticides levels are high enough to kill bees in the area. Since the 1980’s bee-killing varroa mites have been used in the US, but the negative implications involved have only just been realized.

One incident in particular is very upsetting. One day, in the parking lot of a Target store in Oregon, there were tens of thousands of dead and dying bumblebees. An investigation revealed that the day before, a pest-control company sprayed insecticide on the surrounding trees and other landscaping to take care of an aphid infestation. There were warning signs posted to let pedestrians and customers know about the toxic residue left in the area; however, this didn’t help the bees. The investigation reports that 300 colonies of bumble bees were destroyed.

One type of pesticide in particular is especially destructive to the bee population. The pesticide used is called a neonicotinoid, or a “neonic”. Neonic was developed by Bayer about a decade ago. The important different between neonics is that they clear from the air a lot slower than other pesticides, like organophosphates.

Neonics are used on many crops. The chemical is sprayed onto the plant, or sometimes the soil, and then it gets absorbed by the plant’s vascular system. Once absorbed, the plant is now poisonous to insects that eat the plant’s leaves, nectar, or pollen. Unfortunately, the poison has no way of differentiating between bad insects and good insects. The neonic doesn’t kill a bee every time. Sometimes it can damage its immune system or effect its ability to navigate back to it’s hive. While these things don’t kill a bee instantly, they can lead to the bee’s untimely death. A new study indicates that neonics can kill up to 40 percent of a bee’s sperm. This can cause what is called “queen failure”. When the queen bee fails, the whole hive may die.

Since the chemical has been approved for use in the US, it has to be proven dangerous to be taken off the market. Bayer, the company that developed neonics, is a German company. What might surprise you is that neonics are not allowed for use in Germany or any other country in the EU, since it’s too dangerous. On the other hand, it is widely used in the US.

Eugene, Oregon has banned the use of the chemical. Other cities and states need to follow and urge the federal government to ban the use of neonicotinoids. Bees are such an important part of the world that everyone should be invested in this cause. If you care about the environment, plants, or simply eating food you should be interested in the movement to save the bees!!