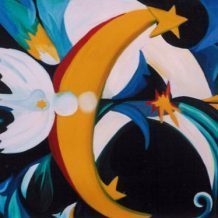 What do Fifth Century B.C. Pythagoreans have in common with modern state-of-the art cosmologists & physicists?  In a word – strings!  For the ancient Greek Pythagoreans it was the lyre string; modern scientists postulate infinitesimally small strings as the ultimate building blocks of the universe.

The Greeks found that the tone of a plucked lyre string corresponded to its length. Changing the length of the vibrating string changed the tone in a precise way; double the length and the tone goes down by a full octave; reduce the length by two-thirds, the note changes by a fifth.  The laws of music and harmonics are discovered and reduced to mathematics.  The Pythagoreans believe everything is based on music and math.

The Pythagoreans extended this thinking in attempt to explain the entire universe.  They partially succeeded but ultimately failed in their attempts.

Modern scientists now feel that they have the theory-of-everything , based on incredibly small strings.  These vibrating strings are the fundamental unit of all matter and energy.  When a string vibrates in a certain way, an electron results; change the vibration of this same string and another particle appears – the electron changes into a neutrino.  As with the plucked lyre, it is the string that is fundamental; the tone (in the musical example) or the subatomic particle, arise from the way that the string is vibrating.

Modern string theory also had its roots in mathematics.  The proposed strings are far too small to ever view directly.  Their existence was slowly recognized as the theory of strings solved formerly impossible problems in physics.  The beauty of the theory is that we eliminate the numerous “fundamental” particles that exist today and unite the formerly conflicting theories of Einstein & the Quantum theory. We potentially have a real theory-of-everything.  Same as the Pythagoreans sought thousands of years ago.

There is another group, growing in popularity today, that share an important links with the ancients & scientists of today, Vibratory Healers.  The string is the primary element with our first two groups, but it is the vibration, more precisely vibrational energy, that modern Alternative Healers utilize to produce wondrous results.

Vibrational energy has been found to be extremely versatile and effective, in its benefits to living things; why is this?  The form of the energy – vibrations – seems to be easily absorbed; frequencies are available for almost any need – in the exact amount of energy required.  The spectrum of vibratory frequencies is immense, offering precise and selective remedies to tune all elements of the Holistic Being… Body, Mind & Soul.

Vibratory Energy of the right frequencies has shown the ability to greatly accelerate the growth and resistance to disease and pests of many plants.  “Melodies” of frequencies derived from plant DNA was studied by French physicist,  Joel Sternheimer, and found to consistently produce accelerated plant growth.

Certain Sound Healing practioners have achieved impressive results “tuning” individuals with the use of unique tuning forks (Hulse).  For example, a tuning fork that emits a single frequency would be placed on the spine, or on key meridians to help loosen subtle energy, or alleviate back pain. Tones, rhythms and harmonics have been associated with chakra clearing, allowing vital subtle energy to enter our systems, producing health and vitality.

Modern Masters, many of them Indian Swamijs and Sufi masters are descendants of a long tradition that use sound to build moral and spiritual development. The master, Sri Ganapati Sachchidananda Swamiji,  does healing concerts where modern day miracles are reportedly performed.  Many ancient spiritual masters held sound as the most powerful means of achieving & influencing the divine (similar to the Pythagorean tradition above).

Sharry Edwards has spent a lifetime demonstrating that the voiceprint of a human voice is a window on the underlying physical and emotional wellbeing of its owner.  Edwards has learned to read and correct imbalances in the human voice – all with vibratory energy – restoring health in the process.  In Edwards BioAcoustics, frequencies can be used in place of physical substances, such as vitamins, muscles and so on.  These frequency equivalents are noninvasive packets of energy that can selectively restore missing balance to the unharmonious soul.  The circle is complete when the restored frequencies are once more present in a new voiceprint is recording.

The author has studied the vibratory modalities of the Bach Soul Flower remedies and of facial skin and muscle rejuvenation potentials.  These seemingly very different aspects of nature are linked and made available or tuned and revitalized by the use of the appropriate sound energies.

Cousto learned to interpret the motions of the planets and stars into Star Tones, powerful forces for using and understanding Astrological Energies.  He played the music of the Stars – literally!

Fibonacci tones mirror patterns found throughout nature and the cosmic realm.  This set of frequencies is revealed in every aspect of creation, including the human body. The ancients believed that tuning to this pattern not only harmonized their souls and bodies, but connected them to the divine. The Solfeggio tones are mysteriously encoded in the Bible. In history and modern times each tone is reported to have its own healing benefit, such as one frequency used to repair DNA in scientific settings.

Different scales with related note-pitches also have been touted to produce a variety of healing impacts. Scales such as the Pythagorean and Just intonation are created with different methods than those used in our current musical scale. Different vibratory patterns are associated with different impacts on the body.

Through the ages the idea of a vibrating string has been used again-and-again to help thinkers better understand the universe around us – and to gain insight into unseen mysteries – be that super-submicroscopic strings or the workings of the human body and the chakras… Einstein had it right, matter IS energy, all is vibration, everything is One, all can be shown to be the same – and we will evolve out of matter – and one day, all is united in the divine.

Jill Mattson is an author, artist, musician and widely recognized expert and composer in the emerging field of Sound Healing. She has written three books and produced six CD’s that combine intricate Sound Healing techniques with her original musical compositions.  The CD’s consist of intriguing, magical tracks that also offer deep healing and growth possibilities.

Jill lectures throughout the United States on “Ancient Sounds ~ Modern Healing” taking followers on an exciting journey revealing the healing power of sound.  She unveils secrets from ancient cultures as well as the latest findings of the modern scientific community showing the incredible potential and healing capabilities of sound.  Jill draws on her extensive research of modern Sound Healing, and over 20 year study of ancient civilizations and secret societies in her music, lectures, workshops and writings.

Please visit her websites where you can learn more about her in-depth studies and work.  Also available on the sites are additional free mp3’s of her Sound Healing compositions, including Solfeggio Tones, Star Energy, Flower Frequencies, Fibonnaci and nature tones.